Tikka came to Rome, Tikka saw many a famous site and Tikka conquered any concerns of bringing a dog with you on your trip to the Eternal City.

With only  three days in Rome, we knew there was a lot to pack into our visit but we made it easier on ourselves by not worrying about anything we couldn’t get to. The focus was on walking the streets and enjoying the ‘every day’ experience – how Romans spend their morning at a market, walking their dogs at Circus Maximus, buying biscotti in Trastevere or having a  long lunch at a little place away from the crowds. 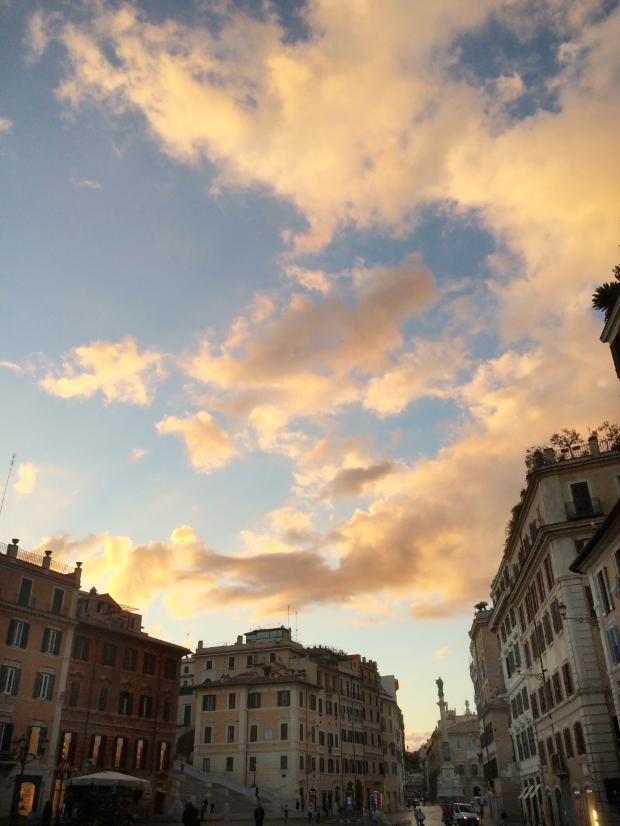 Walking to the Spanish Steps at sunrise. Perfect temperature and no crowds!

Our first afternoon put us right at The Spanish Steps after we traveled down from Tuscany and a stop at Tarquinia (read more here). Our first thought in Rome… man this place is busy. I mean really busy with tourists. You have to take it for what it is, a lot of energy and a lot of people gathering from all over the world to take in the beauty and history of the remnants an ancient time. A couple times the crowds around the famous monuments and buildings were just too jammed for Tikka to be on the ground with her sub 20 pound stature, so we picked her up for a minute here and there to assure she wouldn’t be stepped on.

The crowds didn’t really bother us, but we knew the mornings would be our thing, our time to really explore. And that’s how we got so many pictures of Tikka on her own or with fewer people hanging in the background.

Spanish Steps all for ourselves

On our first morning we went back to The Spanish Steps and it was incredible, only us and a handful of other people. It was relaxing and serene, a place to stop and decide how the rest of your day was going to go. Historically, this is a place for artists and a place to be discovered as a model. Many a beautiful Italian lady would rest at these steps for a chance to be discovered. Our little Canadian lady turned her fair share of heads as she wistfully gazed across Rome while posing for her pictures. What a ham.

On to our next stop, Trevi Fountain. The sun had only been up a short time but it was already starting to flood the streets, and still no crowds to maneuver through. A coin was tossed over our shoulder to ensure our return to Rome one day, a tradition that is clearly still in full effect as the fountain collects about 3,000 Euros every day!

Early morning at the Trevi Fountain

From here we took our time walking through the streets and looking in the store windows that were starting to open for the day. The cafe’s were busy with locals stopping for their daily espresso ritual and a special feeling blanketed us, to be out when the city was coming alive for the day. Once the tourists take over, the local activity gets lost in sea of outsiders and selfie sticks and you miss the moments that make Italy so special. The mother taking her kids to school with morning pastries in hand, the couple saying a warm goodbye for the day after their coffee fix and the bustle of the produce vendors setting up their stalls.

It was a long urban hike we set out on and we worked our way to the Colosseum past the ‘Typewriter’ or ‘Wedding Cake’ that is the enormous monument to Vittorio Emmanuel II. Quite a structure for the first King of Italy and we found out on a night tour that the citizen response was less than favourable when completed due to it’s design and being built right on top of a section of ruins. Hence the nicknames…

On our way along the Via dei Fori Imperiali which takes you right to the front door or the Colosseum, we walked alongside the Roman Forum, the heart of the Roman Empire. It’s astounding visiting from such a young country (Canada) and seeing such ancient and weathered history laying right beside you, along a busy road with people passing by everyday on their way to work. We spent a little time  with an older man taking his terriers out for a morning walk, bumbling our way through a chat in broken Italian and English. Good thing we both spoke dog to fill any holes in the conversation and we already knew the first question from our time in Florence would be ‘Femmina o Maschio?’ 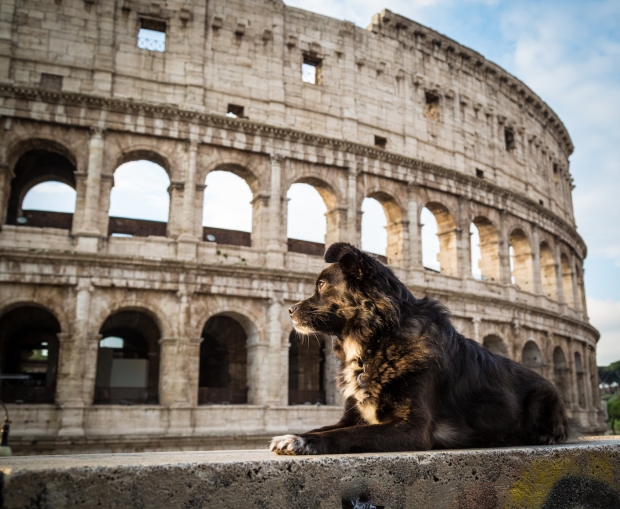 Our own little gladiator at rest in front of the Colosseum

The tour buses were starting to show up and the lines were forming as we arrived at the Colosseum. You don’t forget standing in the shadow of this first century amphitheater as the magnitude of how it was put together hits you like one of it’s first century bricks. Tikka was slightly less impressed as she only spotted one of the famous Colosseum cats. We wondered how to get a picture of such a little dog next to such an imposing structure and the answer was across the road. There is a great spot above the Metro station, up the stairs to Via Nicolo Salvi, where you can look out over a short retaining wall (wide enough for a dog to sit on) and enjoy the unobstructed view. 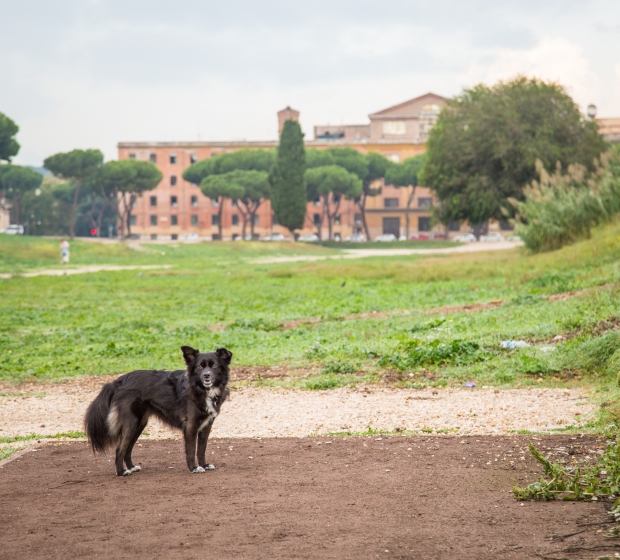 Circus Maximus is a must stop for an off leash romp.

Up to this point, all our city walking was of course on leash and we noted that in this fast moving city all the dogs were close by their owners, on leashes.  Here is where it gets really fun for taking a dog to Rome. Just a 15 minute walk from the Colosseum along Via di San Gregorio  lands you right in the middle of a huge off leash area.  Circus Maximus was an ancient racing stadium, the largest in the empire, and is now a massive  public park . Instead of thundering hooves, canine paws now run along the track chasing balls while owners stroll along not having to worry about dodging chariots. 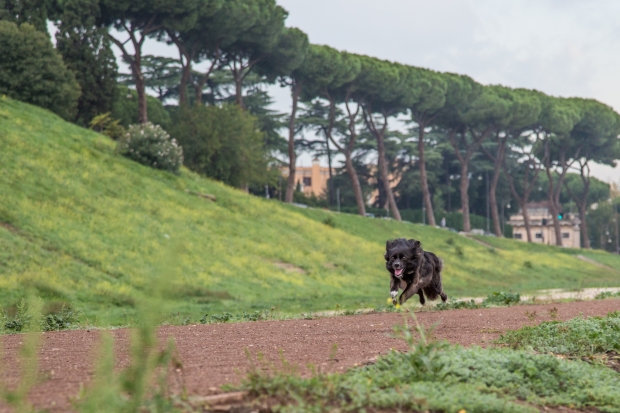 Rome was quickly becoming a playground for us humans as well as our traveling dog. It’s a feast for all your senses, imagining how the world once was by piecing together all the leftover clues speaking to you from the ruins. And with some simple planning to take time at the parks and to venture out in the cooler, less crowded mornings,  the spirit of play filtered down to Tikka who was conquering Rome step by step.

This is part one of three posts of taking your dog to Rome – next time we visit the Tiber River, Campo Fiori market and Trastevere for a special visit to a dog friendly bakery. 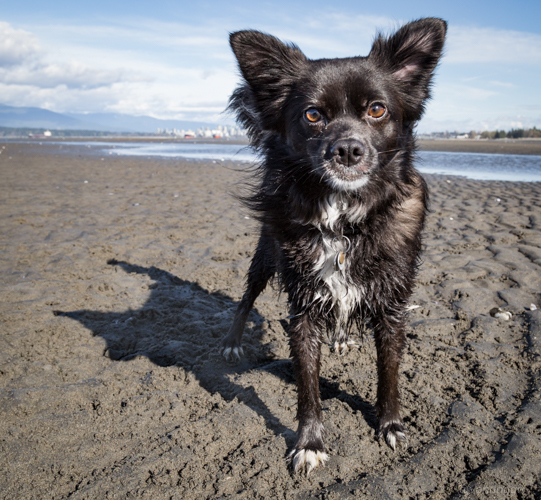