Driving from the Amalfi Coast to our next multi-night city stop in Venice is a long haul for humans (although Tikka could manage the extended nap with no problem) so we broke up the drive with a one night stay in Assisi, in the Umbria region of Italy. It was an early start to the 5 hour drive from our temporary coastal home in Ravello as we wanted to arrive with time to explore Assisi in the daylight and visit an incredibly well reviewed little wine bar. Leaving early also gave us time for a historic lunch stop in Monte Cassino, about 80 miles south of Rome.

The Abbey at Monte Cassino is like opening a book from the ‘WWII blunders’ history book and walking across the page. This rocky hilltop sanctuary was unfortunately bombed by the allies following reports that German forces were occupying the monastery, but tragically only Italian civilians seeking refuge were killed in the air strike. Recognizing the significance of this wartime error, the abbey was rebuilt in 1964 and now stands as a reminder of the Battle of Monte Cassino. Although dogs are not allowed inside, the views and nature surrounding the site make for a great dog friendly stop to stretch the legs.

One of many walking paths in Mount Aurunci Park.

Only a minute back down the hill from the abbey is the Polish WWII Cemetery, the final resting place for over 2,000 Polish soldiers that stormed the bombed out Abbey after Germans eventually took hold of it. This is a huge cemetery that is part of the Mount Aurunci Park, that offers sweeping vistas of the Lazio area and close up inspections of war ‘trinkets’ left behind.

A whole day could easily be spent filling your brain with history and walking the paths with your dog so we made a note to spend more time venturing further into the park on our next visit in this area. But for now, we had to hit the road to make it to our stop over town of Assisi for the night.

We arrived around 4 pm right in the middle of a massive peace march which blocked the road to the quaint hotel we were trying to get to. After we snuck down some back roads we came within 300 ft of the hotel gate and made a ‘sorry we are tourists’ gesture and joined the March for 2 minutes in our rental Jeep before turning into the hotel courtyard. After checking in we did a quick search and discovered this gathering was 100,000 strong, walking 24km from Perugia to Assisi and has been held annually from 1961.

It seemed like we faced all 100,000 people as we climbed the hill against the flow to the center of Assisi. 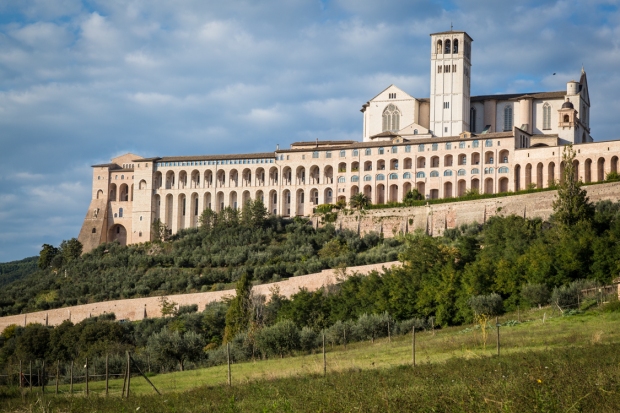 Once at the top of Via Beato Padre Ludovico da Casoria (say that fast three times…), we paused at the Basilica of San Franscesco and witnessed the late afternoon sun throwing a beautiful warm light over the valley below. Tikka even seemed to enjoy the sun was happy to take a break from navigating the crowds. Assisi is a prominent stop for many as it is the birthplace of Saint Francis, one of the Catholic church’s most famous saints, who preached sermons to animals and cast a watchful eye over all creatures. He also died here at the age of 44. Regardless of beliefs and whether or not you travel with your dog, this is a delightful stop when exploring Italy as walking the streets immediately transport you to the wonders of the 12th century. And the porchetta sandwiches and meringue from the tiny street side vendors make for a happy belly.

Perched with the best spot to take in the valley view from atop Assisi. 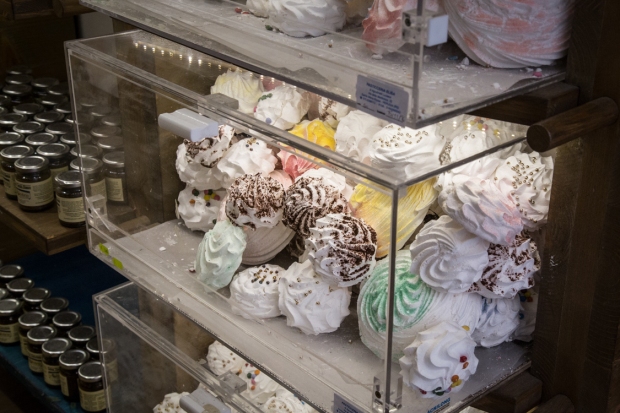 Before coming to Assisi we read about a wonderful wine bar called Bibenda Assisi and the wonderful owner Nila, and knew we had to make a stop after the gushing reviews (how often do you see a 4.9 out of 5 rating?). This quick stop turned into many hours of chatting, discovering new wines and learning about her journey from the Ukraine to opening a business in Italy. This is what traveling is all about – a happy dog crashed out at your feet while you languish over wine, local cheeses and cured meats and chat into the evening with a new friend. Incredibly dog friendly we can’t wait to visit with Nila in future years!

A new host at Bibenda Assisi. Thank you for visiting!

The crowds had dissipated on our walk back to our beds and we had the bricks to ourselves as we wound through the streets chatting about the great day we had in yet another dog welcoming area of Italy. 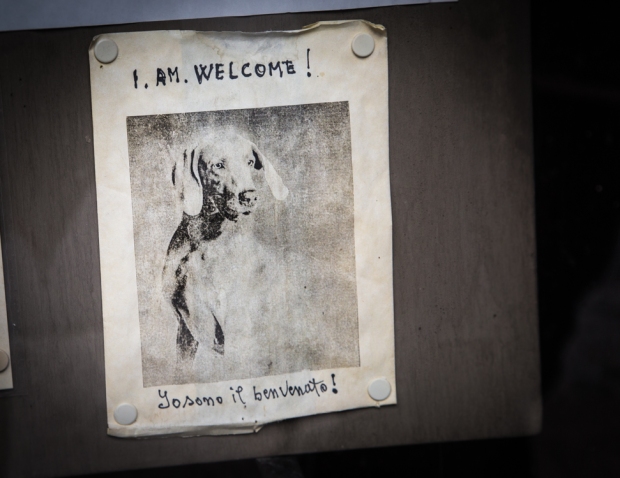 While you await our next Italy installment (Venice, yay!), catch up on the road trip so far on our travel page: Dog Friendly Travel